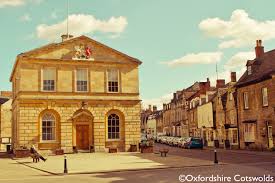 A Short History of Local Governance in Woodstock

Documents from the year 1279 suggest that Woodstock was founded by Henry II, in order to provide accommodation for his retinue of servants when he made his frequent visits to his royal hunting lodge at Woodstock Manor. It was here that Henry kept his beloved mistress, Rosamund Clifford, “The Fair Rosamund”. Of course, eventually the Queen Eleanor found out but that’s another story. Suffice to say that Rosamund’s presence in the area brought regular and frequent patronage of the king. Better by far that the town be founded from love than from war.

The name “Woodstock” means “a place in the woods” and with the royal forest of Wychwood stretching from the town west and north towards the Cotswolds, the hunting lodge on the doorstep, and the “Great Park of Woodstock” it was natural that the town should grow in importance.

The town soon started electing Mayors and gathering together all the trappings of a town administration. But it was not until 1453 that the town finally received its royal charter from Henry VI, which confirmed the many ancient liberties and customs that it had long enjoyed. The town enjoyed the status of a Borough, which it retained until 1974. Its original constitution established a Mayor, a High Steward who was always a gentleman “of position”, a Recorder or legal adviser, six Aldermen, twenty Common Councillors, a Town Clerk, a Cryer of the Court and a Sergeant-at-Mace, effectively the local policeman, most of whom were elected for life! Later they added two “Chamberlains” responsible for managing the town’s finances. The charter also granted a valuable marsh called “le Pool”, later the corporation water meadows.

In those days the corporation was very much a self-serving organisation. You had to be a member of the Merchant Guild, later a Freeman, to be allowed to trade in the town. At that time, the Borough did not include that part of the town north of the River Glyme and known as Old Woodstock, nor did it include the lands to the south and east, which was an independent parish known as Hensington Without. Most of Old Woodstock was absorbed into the Borough in 1886 and the remainder, as well as Hensington Without was ceded to the town in 1985.

Expenditure was 34 shillings and 6 pence (£1.73) and included the cost of making “two payers of stooks”, (stocks), a “cokyng stoole”, (cucking or ducking stool), and all things necessary for the same – total 9 shillings (45 new pence). 13 shillings and 4 pence, (67 new pence) was given to the tenants of the Common Pool for damage done “to the herbage by the horses of the King’s servants by the procurement of certain misgoverned persons of the town”.

It was not always a harmonious borough and in 1581 there was an almighty row between the then Town Mayor, William Skelton, and a certain George Whitton, surveyor of the park, Member of Parliament and local gentleman. Whitton comandeered certain land in the town and defended it “with armour and warlike weapons, some having long pyked staves, swords, bucklers, daggs and other monstrous weapons”. When Skelton eas elected Mayor, Whitton “uttered his grief alleging, in many choleric speeches, that the election was not according to ancient custom”. Then he began “to shuffle the Mayor out of his place and used him and others with unmannerly terms and would not suffer him to speak to the people”. The dispute raged for three years until in 1584 the Lord High Treasurer, Lord Burleigh, intervened and amended the town’s charter to make it more democratic. Things then settled down.

In 1642, during the English Civil War the town took a staunchly royalist position which, when the parliamentarians were suddenly in the ascendancy caused some problems. The Town Clerk had to issue a grovelling apology before the House of Commons.

In 1705, following the victory at Blindheim the crown granted Woodstock Park, thereafter called Blenheim to John Churchill the first Duke of Marlborough. The construction of the great palace and the remodelling of the grounds by the great architect Vanbrugh and later the eponymous Capability Brown, provided great commercial opportunities for Woodstock and added to its prosperity. By 1718 the British passion for travel became firmly established, first with the turnpike network of roads, which included the London to Oxford and the Oxford to Stratford roads. Coaching became all the rage and in 1808 there was a regular coach service between Woodstock and London running three times a week. The fad with coaching was soon overtaken by railway mania, though it wasn’t until the 8th Duke commissioned a branch line from Kidlingtonm to Woodstock that the age of steam finally reached the town. The single track line opened in 1890 and the engine was named “The Fair Rosamund”. The line closed in 1954.

From the outset of the building of Blenheim Palace, the Marlboroughs began to dominate the borough as High Stewards, political and ecclesiastical patrons and major employers and purchasers. They acquired property in the town, notably the Marlborough Arms and The Bear, the two most significant coaching inns and the waterworks. The were also major benefactors, paving the streets, building the new town hall in 1766, restoring the church, providing almshouses and land for the National School.

The Marlborough’s influence in the town was, however, sometimes resented, and an anti-Blenheim group was usually active in local affairs. Perhaps it was the domination of the Blenheim estate that led to a decline in interest in Borough affairs. Despite the prosperity of the town’s association with the building of Benheim Palace, by the mid 1700s things began to get out of hand once more at the Borough Council. The Corporation was spending lavishly on itself and even gambling with the town’s money on lottery tickets. By the early 1800s the Council almost ceased to exist. Factions sniped at one another, councillors stayed away from meetings and the entire administration became quite shambolic. In 1834 and 1835 the Mayor was elected at a meeting attended only by the outgoing mayor and the Clerk. In 1836 there was no mayor at all except that Alderman Carter took it upon himself to assume the role!

Eventually, in 1838, the rifts began to heal and the Council was once more established on a businesslike and democratic footing and has remained so to this day.

In the last one hundred years, Woodstock has been the beneficiary of its proximity to Oxford, which has provided employment opportunities first at the Cowley car plant of Lord Nuffield’s Morris Motors, and then the burgeoning of high tech industries and publishing no doubt facilitated by the city’s academic establishment. The explosion of the tourism industry has also underpinned the town’s prosperity with easy access to London and Heathrow.

Winston Churchill, arguably the greatest British Prime Minister of the twentieth century, was famously associated with Woodstock from the moment of his birth. His father ( a younger son of the 7th Duke of Marlborough ) and his American wife, Jennie, were staying at Blenheim Palace when Winston was born on 30th November 1874.

He spent much of his early life at Blenheim and the house is known to have been an inspiration to him throughout his life. A large painting of the Palace was hung above his desk in the study of his home at Chartwell which he bought in 1922 and where he lived till his death. As an artist himself he painted both Palace and Park.

Winston wasn’t able to spend much time at Blenheim during the Second World War but in 1947 he was made a Freeman of Woodstock and 18 years later his final contact with the town was made. He died on 24th January 1965 and was conveyed to his final resting place in the quiet churchyard at Bladon where he was buried with his family, within a mile of Woodstock.

In 2010 the town celebrated 900 years since the original enclosure of the Royal Park by Henry II in 1110. It later became Blenheim Park. To mark the occasion, a book on the history of the park was commissioned with contributions from local historians, academics, from local special interest groups, and from The Marlborough School. The book, “Woodstock and the Royal Park” is available at local bookshops or from Woodstock Town Hall. The ISBN No. is 978-1-906725-40-2.

There are no upcoming events at this time.